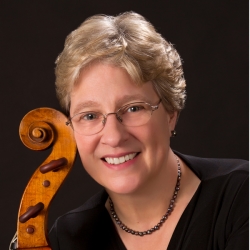 Lori Barnet is a graduate of Bennington College. Her primary teachers include Robert Newkirk, George Finkel and Barbara Stein Mallow on cello, Phoebe Carrai on baroque cello, and Josef Gingold, Artur Balsam, Joseph Fuchs and Jacob Glick on chamber music. She is principal cellist of the National Philharmonic, Wolf Trap Opera Orchestra, and Philadelphia’s Orchestra 2001 where she holds the Dell Venarde Principal Cello Chair. She has appeared as soloist with the Augusta (GA) Symphony, Alexandria and Mclean Symphonies, Orchestra 2001, National Philharmonic, Washington Chamber Symphony and several university ensembles. She was principal cellist of Penn Contemporary Players (Philadelphia) and the Contemporary Music Forum (DC), each for 20 years, and served five seasons as the continuo cellist on period instruments for the Washington Bach Consort’s cantata series. Other appearances as a baroque cellist include those with the National Cathedral Baroque Orchestra, the Vivaldi Project, Ensemble Gaudior, ArcoVoce, Kontra Bande and with the National Gallery of Art Vocal Ensemble. She has toured in Russia, Italy, Denmark, England, Cuba, and China and recorded for Orion and CRI.

She has been a faculty member at The George Washington University since 1991 where she teaches cello, coaches chamber music, and appears regularly with the University’s faculty performance ensemble, the Columbian Consort.